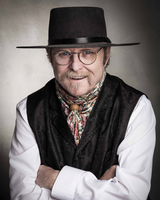 Diamond Doug Keith is a Western Painter and a Cowboy Cartoonist who grew up idolizing Charles Russell, Fredric Remington and Norman Rockwell. He went on to develop his own unique style utilizing acrylic and other mediums in a bright semi realistic way.

“Diamond Doug Keith” is a Western Painter, Cowboy Cartoonist and a Cowboy Poet. Doug is able to capture the cowboy way of life through his art, poems and stories. The cowboy life is the life that he still lives today. 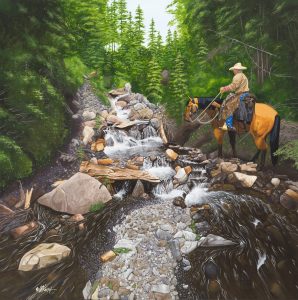 Diamond Doug’s main medium is Acrylic utilizing both a wet and dry brush techniques to create texture in a semi realistic style. He will paint on any surface from cow skulls to board and of course stretched canvas. Doug also veers into other mediums, water colour, graphite and polychromo coloured pencils as well. Ninety percent of his subject matter has a Western tilt, Cowboys, horses and children are a favourite. However if a strong idea pops into his head that isn’t Western he is not scared to paint it.

Doug has won or been nominated for many awards including; nominated for CD/Album cover of the year for the CCMA’s (Canadian Country Music Awards) and winning Best Illustration in the Signature Awards, among others. 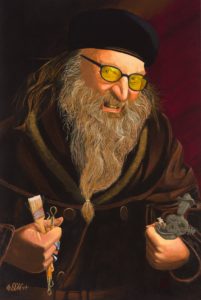 Doug is a sought after artist and painter. In fact he was commissioned to produce the official portrait of “Skoal’s Airwolf”, the three-time world champion buckin’ horse, upon its retirement. Doug was also commissioned to do the 50th Anniversary Painting for the 2013 Manitoba Stampede a huge honour taking over three months to paint and a 1000 reference photos to do. Doug has shown his art for nine consecutive years at the National Finals Rodeo in Las Vegas.

He is also a proud member of the prestigious Cowboy Cartoonists International consisting of the top Cowboy Cartoonists in the world. It was this organization which brought him to the attention of the Leanin’ Tree family of greeting cards where he now produces comedic cowboy cards for them on a regular basis.

Doug has been featured in several Nationally broadcast documentaries. Including a feature in the two hour CBC Calgary Stampede Sunday Finals National broadcast. He has also been published in many books, magazines, DVDs and Cds.

If you see Diamond Doug Keith at an easel, around a fire or in a saddle please come and say hello!